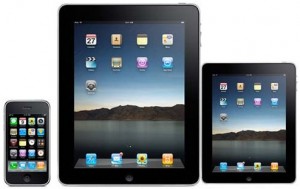 It was only a matter of time but so soon?

The iPad only touched down in the UK a coupla months ago and already all manner of v2 tweakage is being chatted about!

The rumoured OLED screen would add more depth of colour but I reckon that the LCD Retina display that’s sported by the iPhone 4 would look un-freaking-believable on the iPad.

Word on the street is that iPad 2 would have slick enough graphics to challenge the Xbox 360 and if you want more choice as to what size your Apple tablet comes in……. howsabout 5.6 and a 7 inch model?

Apparently Compal Electronics have won the order to make the new iPads, which will include the specced up version 2 and some ‘sources’ are saying that Apple has placed orders with plans for the new gadgets to land in late 2010, or early 2011.

OLED screens and a beefed-up graphics card sounds great and the addition to some iPad Mini’s is intriguing; but if the upgrade lands this year I can see a lot of unhappy iPad owners!

Do you reckon having some new size iPads is a good idea?