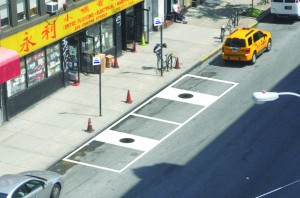 Almost every major motor manufacturer has either released or plans to release an electric car of some description. The main reason for thier slow uptake is still the lack of charging points and batteries that might not see you to the end of a journey. New York startup, HEVO, might have the answer.

HEVO aims to solve the charging issue by creating special reserved parking spaces where a sort of manhole wirelessly charges the car parked above it, not unlike the plans I reported by Hertz last year.

Electric vehicles, generally speaking, have a driving range of roughly 200 km. That’s more than enough to cover the average daily travel needs of a user as this has been estimated to be around 47 km.

That’s fine, but the amount of people that still end up on the roadside because they’ve run out of petrol makes me assume that the same will be the same for EV owners.

The ideal would be to be able to top-up your charge as you drive. But, for right now, it’s probably more practical to be able to charge when you park.

I’ve seen plans for parking spots equpped with charging stations before which would solve the problem. The thing is, do our streets need more clutter to be plastered with flyers, to be reversed into or to be vandalised? I suppose if they looked like tecnho forests, that would be ok.

Wireless charging would avoid all of that as well as making the potential trip hazard of charging cords unneccessary.

The system proposed by HEVO provides 220V using induction and up to 10 KW of energy from the manhole charging pad to the vehicle.

Naturally, the vehicle needs to be already equipped with a receiver along the drive train to absorb the power but, according to HEVO, 10 hours of charge would be enough to provide 175 miles worth of travel.

For now, HEVO plans to open its first two charging stations early next year in lower Manhattan, servicing New York University’s fleet. This kind of service won’t be limited for fleets though.

Individual EV car owners would be able to reserve an electric-charged parking space, too.

Could this happen over here? I’m still waiting to be able to charge my phone from the electricity in the air.