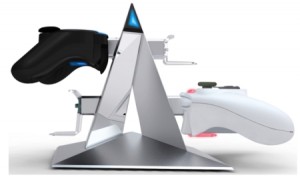 There’s a number of ways of charging your console controllers but none look like this!

The Konnet Power Pyramid Supreme is THE best looking (unless you know differently) way to charge up to two PS3 and two Xbox 360 controllers at once.

It even has an LED status indicator that tells you when the charging is complete.

If you only own one console then Konnet also sells similar models that charge only PS3 or only Xbox 360 controllers.

All Power Pyramids are $49.99 and are available in black or white from Konnet.