Power Gig: Rise of the Six String! Like Guitar Hero but Better and More Useful! 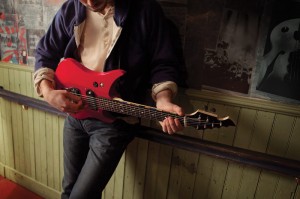 If you enjoy a good game of Guitar Hero and/or Rock Band but can’t help that nagging feeling in the back of your mind telling you that playing these is all very well but it’s not actually teaching people to play an instrument – well, my gadgety friends, Seven45 Studios may be our saviours for they bring Power Gig. The first instalment of this game sounds almost like a ManOWar album: Rise of the Six String!

As the title suggests – the game controller is an actual, real, stringed instrument.

It sounds like the proto-axes and alpha build of the game were pretty impressive and the fact that not only will you be able to buy individual packs you’ll be able to get you buddies involved with the “band bundle” that includes the game, a guitar (plus a strap, picks and an extra set of strings), a drum set and a microphone. Unfortunately the latter two items are still in the very early stages of production and weren’t available when Engadget was there.

The Guitar Hero/Rock Band beat matching game is still very much in evidence but Power Gig turns it up to 11 and brings “chording” into play. Yup, you’ll have to strum actual power chords that match the chords used in the song. This means that whilst you’re playing you’re learning a real song on a real guitar.

That real guitar can really be amped-up so you can rock out with your newly learned skills. All you have to do is depress the dampening pad beneath the neck and you can Smoke on the Water to your hearts content.

For more pics and info slip on your leather pants and rock over to Engadget!