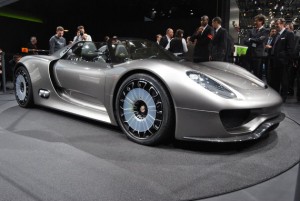 We’re all starting to realise that Hybrid doesn’t always have to mean boring.

But Crave have brought to my knowledge a truly droolworthy hybrid motor.

They’re at the Geneva Motor Show and got up close and personal with the gorgeous 918 Spyder.

Instead of getting some hippies to chill out around the Stuttgart factory chatting about mother earth and eating lentils apparently Porsche’s team designed the 918 Spyder as a hybrid because adding some electric motors should give the car more kick.

The 918 Spyder has a couple of electric motors powering the front wheels with a third, mounted near the gearbox in the middle driving the rear.

You have the option to add the lovely assistance of the Spyder’s 500bhp, 3.8-litre V8 petrol engine should you feel more urgent 😉

Every thought you’d hear of a hybrid being able to out gun a Porsche Carrera GT? Well, Porsche reckons this 918 Spyder can complete a lap of Germany’s famous NÃ¼rburgring Nordschleife circuit in under 7 minutes 30 seconds. BOSH!

If you’re needing to go further than 16 miles just flick it into hybrid mode and that will bring in that lovely V8 – but even then you’re not going to be targeted by Friends of the Earth or Greenpeace as the 918 Spyder will manage 94mpg, while emitting just 70g/km of carbon dioxide. You’ll be able to point at the Green Police in their Prius with a smile as you tell them that your Porsche does better than their 72mpg, emitting 89g/km of CO2 – and yours looks a lot better!

I love the little touches – like the dash instruments glowing green when in eco mode and red when using performance mode. The car’s sat-nav can work out if you can get to where you’re going on electrical power alone, and how small adjustments to your driving style can extend the range.

Ok, so the 918 Spyder is still a concept but Porsche says that if people want it Porsche will make it!

Would you have one?

You must check out the video!