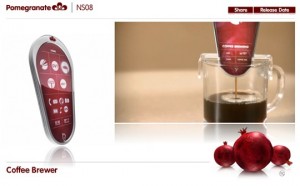 I love smartphones and I’m one of those people that loves it when convergence works. I was one of those guys that searched to find if I could actually buy the Wasp T12 Speechtool after seeing it on the very first episode of Nathan Barley back in 2005 🙂

Now I’ve stumbled across this bad-boy. The Pomegranate NS08 built and designed in Nova Scotia, of all places.

The millimeters-thin touchscreen phone handles voice, web browsing, and e-mail with ease but has some other surprises up its shell!

After checking your e-mail in the morning, the Pomegranate can brew coffee by using special single-serve coffee pods. There are currently four flavours available (Hazelnut, Columbian, French Vanilla, and Sumatran), which is a nice start.

Once youâ€™ve gotten your first cup of coffee in your system, the NS08 features an electric razor for trimming on the go. 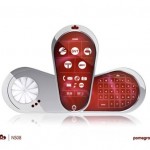 You also get a high-definition projector for movies and the thing will even turn into a harmonica: â€œYou can play along with preset beats or go freestyle. No other phone in the world plays like the Pomegranate,â€ according to the NS08 website.

All of the above sounds fab but that keyboard looks almost impossible to use and the small problem that the phone isnâ€™t real.