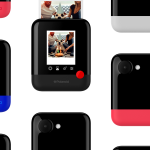 Get Your Own Polaroid POP! 2.0

There is still a resurgence for all that is retro and for gadge that gives us a flavour of analogue. The Polaroid POP is here to remind you of when seeing your photos straight away involved your camera spitting out a hard copy print.

The Polaroid Pop is part of the Polaroid line of instant cameras and printers that use the Zink format (zero-ink). The gadgets quickly print fun-sized digital photos that resemble the old Polaroid snaps of times past.

I always wanted a Polaroid camera back in the 80s, so this was a fun chance to see what I was missing, albeit that the Polaroid name is now licensed to a variety of kit – from televisions to cameras.

The Polaroid POP’s design states its fun credentials loud and clear. If you had any thoughts of using the POP as a serious photographic tool, then one look of its chunky exterior tells you otherwise.

The main body of the POP is black with the bottom, removable quarter, being a solid pop of bright colour. Our review model is yellow, but there’s also green, blue, peach and more to choose from. There are six colours in total and all come with an optional matching chunky plastic wrist strap.

At the front is the 20MP CMOS lens with flash next to it. Around at the rear is a small 3.97-inch touchscreen. The only other thing of note is the big red shutter button.

One of the reasons for the Polaroid POP’s heft is that it is also a printer. Up to ten sheets of Zink paper can be loaded from underneath by removing the coloured section. The coloured part is held on magnetically and also reveals the SD card slot.

At 454g the POP is surprisingly weighty, and at 15cm tall, you can’t really call it compact. However, it’s not uncomfortable to handle, and its size is kind of necessary to hold that printer paper.

Firstly, that glossy plastic loves fingerprints. If you were thinking about giving this to a kid, then be prepared to have the POP age in seconds.

The Polaroid POP has built-in Wi-Fi so you can send photos and videos from the POP to your phone or tablet using the free Android and iOS app. Alternatively, you can send snaps on your phone and use the POP as a printer. You can even add the Pop’s various borders and filters to those photos before you print.

Using Wi-Fi, as opposed to Bluetooth, means that transfers are pretty quick. All it means is that you have to disconnect your phone from whichever Wi-Fi connection it has and connect it to the camera’s own Wi-Fi network. Not tricky at all and, chances are, all the camera’s SSIDs are 1234567890 by default.

Also, if you want to post one of the POP’s photos on Instagram, you have to send the snap to your phone and hit accept. Then, you have to disconnect from the Pop Wi-Fi, hook up to the internet as you would typically and then share it online. It really is a shame that isn’t able to share with your socials directly.

Taking the camera out and about I found myself using my phone, a Huawei P30 Pro if I wanted a specific shot and the Polaroid POP if I wanted a particular look.

The particular look is reminiscent of the instant cameras of the 70s and 80s. Colours are muted and detailing isn’t what we now expect from our phones, let alone cameras. Additionally, low light and moving objects are Kryptonite to the POP.

However, we must remember what this camera is supposed to be doing. Once you get used to the lag between pushing the button and the photo appearing on the screen and that you’re never going to get forensic levels of detail, there is a certain magic to still be enjoyed.

Additionally, it’s fun to play with the filters, add borders, and stickers to the images. I can see teens especially getting a kick out of the POP. But, frames, stickers and filters can all be attained on most smartphones now through apps and even the phone’s own editing software.

The POP can also create gifs and shoot video, with a similar range of potential effects. Naturally, these cannot be printed and have to be sent to your phone over the Wi-Fi connections.

The small format of the prints does disguise some of the camera’s shortcomings. Selecting the print option sends the internals whirring and clunking.

Before you can print anything off you have to send through a blue card with the calibration settings printed upon it.

The neat touch of the selected image moving up the screen as the camera starts to print would have been better had it been in sync. That said, printing off pictures around friends and family, still garnered a feeling of excitement and anticipation.

The Zink does appear to mute the colours even further in some cases, but I’ve seen snaps taken by the original Polaroid cameras and those images don’t really pop, either, so to speak.

I do like that you get the large bottom border on the photo and that you can even scribble on via the camera’s app, should you so desire.

The Polaroid POP is good fun and I can see it being popular with young teens, college students and social folk. However, that friendliness may be tested as you burn through the 3.5×4.25-inch Zink paper at £29.99 for 40 sheets or £9 for 10.

I fear that the Polaroid POP could find itself in a bit of ‘no man’s land’ as far as who would actually buy it as, at £200, it’s definitely not a toy. Also, it’s not at a price point most of us would buy for just a bit of fun.

I cannot deny that I have enjoyed having it around and being able to print photos from my phone to the Zink sheets is nifty. The question is, would I buy a Polaroid POP or would I look for a small photo printer? I guess it depends on how grown-up I am feeling.

The Polaroid POP 2.0 is available now for £199 and comes in black, green, peach, white, blue and yellow.