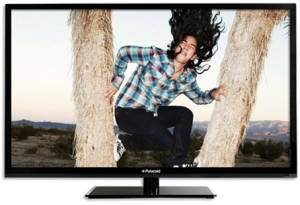 Polaroid* seems to be heading for newer pastures and have announced what is probably the cheapest 4K TV yet.

4K televisions, also known as Ultra HD, have thus far remained on the wish list for many consumers, with sets retailing for many thousands of pounds. Take this 65-inch Panasonic that I reviewed a few months ago for example which costs around 5-and-a-half grand. I’m not even looking at what this 82-inch Tosh costs 😮

The new Polaroid model, however, looks set to retail below the magic $1000 mark (about £600 or so) – making the photo-realistic gogglebox accessible to many more people.

Fair enough, 600 notes is still not pocket money but at least it means that the market for 4K tellies is starting to look more inviting to those not dating a Premiership footballer or is best buddies with a Russian Oligarch.

The nearest competitor to this in the ‘budget’ 4K race I can think of is the SEKI 50-inch telly which costs around £900.

Personally I think it might be a tad early to fork out even £600 on a 4K TV as there is still a distinct lack of things to watch in native Ultra HD.

Perhaps Polaroid and SEKI are merely the vanguard and other manufacturers will move in to this lower price-point and create the audience for 4K programmes and films.

Polaroid doesn’t seem to be stopping at this flagship telly either. They’ve also revealed plans to produce regular (1080p) HDTVs in all kinds of formats ranging from 32-inches to 69-inches. Apparently at next week’s CES they’ll also be showing off a 50-inch smart TV, with built in Roku functionality which should prove interesting.

*Polaroid is one of the better known “zombie brands”. This is when a company ‘disappears’ and sells its naming rights to another company. In this instance the TV is actually manufactured by a company called Empire Electronics Corp. based in the United States.