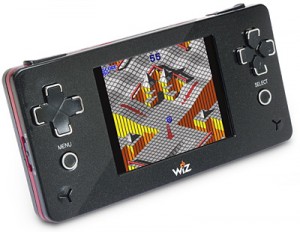 Got an email from Think Geek and I just had to share this!

They seem pretty hyped about the GP2X Wiz and you dig your retro gaming then this is gonna be right up your arcade!

This pocket-sized beauty has probably the widest range of emulators for so many game systems, computer platforms and consoles shoved into such a small space.

The spiffy MAME emulation allows you to run all your favorite arcade video game classics, even vector games. Amiga game emulation is rock solid. You can run Atari ST games, Commodore 64, NES, SNES, Gameboy, Gameboy Advance, NeoGeo, Flash Games and more too numerous to mention. Of course you’ll need to find yourself some game roms… but that’s what search engines are for right?

The Wiz can also play video files including MPEG4, Xvid and DIVX. You get a built in e-book reader, calendar, voice recorder… etc….

You get 1GB of storage built-in and you can expand on this with the SD (SDHC) card slot.

The high-res touchscreen makes navigation easy and the gaming controls feature a d-pad on the left with buttons/d-pad on the right and two shoulder buttons on the top. It’s plenty good for anything a retro game can dish out. There is an active development community for the GP2X Wiz and with a respectable ARM9 533MHz Processor overclockable to 800Mhz you’ve got plenty of power to play with if you’re interested to write your own applications.

Before you slap your hard-earned down for one it’s worth mentioning that the Wiz does not come with any emulator software or game roms pre-installed.

You’ll need to download the freeware emulator for the console or computer system you want to emulate. Then you’ll need to unzip the emulator software, and copy it to an SD card along with some game roms you’ve downloaded.

Then start-up the Wiz, go into the “launcher” option and run the emulator.   Inside the emulator you’ll choose the rom you want to load and then the game can begin.  Each emulator software interface is a bit different and most give you the option to overclock the Wiz to get the best performance.

Remember that you are running emulator software… most games work perfectly, but some may run slow or be glitchy. You may have to configure the controls to work well with the game you want to play. Documentation is not always the best, so you might need to put in a bit of effort to figure things out. If any of this scares you, then you may want to reconsider your purchase.

This little Wiz will cost you $180 – check out the vid below for more details, stuff n tings 🙂