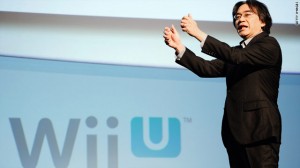 Nintendo gaffer Satoru Iwata has been poo-pooing the efforts being made by Microsoft and Sony to try and copy his Wii U second-screened controller.

Iwata has looked at what Nintedo’s closest rivals have been coming up with in response to the Wii U’s tablet style controller and has said that neither can match “the rich gaming experiences we are talking about”.

Ever since the Wii U was unveiled last year both Microsoft and Sony have been seen to add peripheral services to their consoles which just so happen to provide touch-enabled portable screens to enchance the gaming goodness.

Well, they do say the highest form of flattery is imitation 😉

Microsoft’s SmartGlass app turns your iOS, Android or Windows Phone smart phone or tablet into a handy secondary screen for the Xbox, whereas Sony has been making all kinds of noises that their PlayStation Vita handheld will be the PS3’s bestest friend.

Iwata isn’t worried at all. The Nintendo boss said that there are “several essential differences between what we are doing and what other companies are doing”. He goes on to point out that “Anyone who has a Wii U will be able to enjoy the two screen experience, while the other companies are saying its optional, but only if you have this device or that device.”

OK, we get it Satoru – you buy a Wii U and you get that second-screen sensation guaranteed. The thing is, all those Xbox fans are just going to point out the fact that most people who are console gamers will, more than likely, own a smartphone and/or a tablet.

That will be their main line of defense I reckon – SmartGlass’ appeal is that you already own that second controller, and can choose whether to play using a touchscreen or a traditional peripheral – that might also keep the Xbox 720’s price competitive.

Not to be beaten, however, Iwata makes a valid point in saying that using a third-party tablet or smart phone to control a console could introduce lag. “You might be able to get away with latency for streaming video, but not for video games.” Then the nifty Ninte Ninja goes in for the kill as he playfully asks: “Most of us just have two arms, so how are we meant to hold this additional device?”

All of this “mine is better than yours” playground bad-mouthing could soon be over as the future looks set to be console-less. Thanks to Apple seeming snatching the casual gaming market from Nintendo’s 3DS and the dawn of online game streaming and super Smart TVs – it might be the final fight to be top as the bubble bursts.