PlayStation Vita Update Turns it in to a PS3 Controller 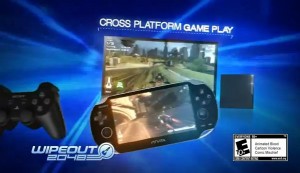 Sony has revealed that a bunch of new features will hit its handheld PS Vita console later this month thanks to a firmware update to version 1.80.

Sony has stated that version 1.80 of its firmware for the PS Vita handheld gamer will endow it with many new features but, to me anyhow, the most exciting one must be that Sony gaming fans will be able to use the Vita as a controller for the PlayStation 3!

This spanky new feature, called ‘Cross-Controller’, will only be compatible with select games, however and Sony hasn’t revealed the full list yet.

One title which will play nice with the Cross-Controller functionality has been named as being LittleBigPlanet 2.

Sony could open the Vita open to more title if it only wanted you to use the pocket Sony as a classic PlayStation controller but the idea is that users should be able to take advantage of everything on the Vita. This means that the front and back touchscreens will be interactive and usable, as well as the Sixaxis motion system – I reckon they have Nintendo’s Wii U and GamePad fixed firmly in their crosshairs 😉

Other niceties appearing in the firmware update include the console’s homescreen will become controllable using the hardware buttons rather than relying on the touchscreen. Users will be able to scroll between icons using the analog sticks or D-pad, and select one using the familiar X button.

The rear touchpad will come into use more too, as Sony is introducing support for it within the native web browser. The Music Manager application will also now feature support for playlists, furthering its ability as a media player.

Sony also claims that this firmware update will give gamers the ability to easily take screenshots within any game – at present this feature is only supported in select titles. In addition, MPO files will be viewable within the Photos application, while the Maps, Near and Group Messaging apps have been finely tweaked with minor improvements.

Finally, firmware update v1.80 will bring the ability to play PSone classic games on your Vita, which is bound to bring back some memories.

The update is due to hit ‘late August’.