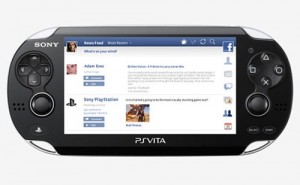 The PlayStation Vita is now available in the UK with bargains to be had if you hunt around. You can now ‘Like’ stuff on it now too!

Sony’s powerful handheld gaming console is now in the stores with Asda, of all places, seeming to be the best bet for a bargain.

If you’re bored of your Nintendo 3DS then HMV will let you chip it in for a Vita.  They’ll give you£132 in part-exchange which means that a Wi-Fi only Vita will only hit you for £98. You also get a copy of either FIFA Football or Uncharted: Golden Abyss thrown in.

Any new gadget worth its salt should be able to hook up to the social networks and now the PS Vita is Facebook friendly.

The PlayStation Vita Facebook app is available now for free on the Playstation Vita store.

Is the Vita, even after its price cut and new social skills, enough to attract people away from the iPod touch?

The iPod Touch is cheaper, its games are a lot cheaper, or even available free!

The Touch is much smaller and has better battery life too. But is it for ‘real’ gamers?