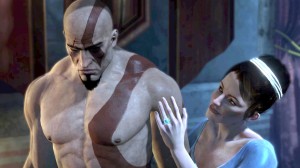 As well as their “world’s lightest” snapper, more news out of CES from Sony as they take the wraps off their game-streaming service – Playstation Now.

PlayStation Now will bring classic titles to not just the PlayStation 4, but PlayStation 3, PS Vita, mobile devices and even Sony Bravia TVs.

The way it manages to play nice with all those platforms is that all of the processing is done in the cloud with the results being beamed back to your screen of choice. This gets around sticky problems such as the PS4 not being able to emulate PS3 games because of hardware differences, etc.

It’s a bit like the OnLive service for PC games – and so the only real requirement would be for your devices to be connected to a fairly high speed internet connection.

The service will initially launch for PS4 and PS3 with both a rental and a subscription model – so players can either pick games or have more of a buffet selection – before expanding to other platforms later.

Word is that a beta programme will initially launch on PS3 in the US at the end of January and then spread from there.

The first games on the service will be four major PS3 titles: Beyond: Two Souls, God of War: Ascension, The Last Of Us and Puppeteer. Sony promises that the games will support everything you’d expect the normal disc versions of the games to – trophies, online multiplayer, the whole nine yards.

This could well open up many more doors than simply playing PS3 games on your telly or mobile. Just think, Sony could actually launch new PS4 games on the PS Now service for instant streaming, or why not use it to bolster the processing power of the Next Gen console for even bigger and more technically demanding titles?

This could, in fact, be a way for the PS4 to keep pace with the latest in PC gaming technology.