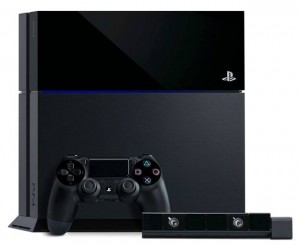 Sony has taken the opportunity to finally reveal the design for their next generation games console, the Sony PlayStation 4, at the E3 games conference at the Los Angeles Convention center.

The new Sony PlayStation 4 design takes the form of a slanted rectangle and features a two tone matt/gloss finish, losing the curves associated with the last generation PS3 console, and more in-line with Microsoft’s Xbox One console. There is definitely a battle going on for the space under your living room television.

The Sony PlayStation 4 console will be equipped with 8-cores of AMD Jaguar processing power and uses a 8GB GDDR5 RAM and next generation AMD Radeon graphics card to process your games with 500GB of storage, 2 x USB 3.0 ports, and 1 x AUX port, Wi-Fi, Bluetooth 2.1+EDR, and HDMI port all being present.

The news of the regional unlocking was announced by Sony’s Brad Douglas at E3, and Sony will allow developers to choose whether they actually wish to lock their games to a specific region.

This is a completely different option to that being offered by Microsoft for the Xbox One games console which requires an Internet connection to be made every 24 hours to validate games.

The Sony PlayStation 4 will come bundled with a Dual Shock 4 controller for $399, €399, and £349, with the PS4 Eye motion controller available to purchase separately.

The new Sony PlayStation 4 requires no online connection to play and games for the PlayStation 4 console can be sold and shared with ease. Check out the video created by video below to see how easy it real is to share PlayStation 4 games with friends.

Microsoft announced that they would be launching their new next generation Xbox One console in November so you can expect the new Sony PlayStation 4 to launch around the same time.