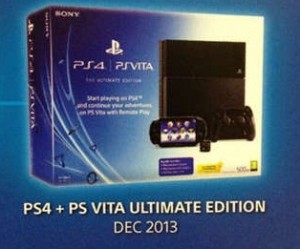 You may have noticed that Sony is putting quite a bit of money behind its PS4 campaign but It’s not just their next gen home console that they’re pushing. Sony is throwing £2.5m behind Vita, too.

In the hope to score a nifty gaming 1-2 Sony is putting together their PS4 and Vita into an ‘Ultimate Bundle’, which will launch before Christmas as well as making it possible for you to buy PSN download games in stores.

Gamers that own both consoles can stream their PS4 games to their Vita and play off-screen, which Sony views as a big selling-point for the handheld and obviously won’t hurt PlayStation 4 sales either 😉

The company is also running a £2.5m TV campaign for Vita. Entitled ‘The Best Way to Play’ the ad will promote both Vita’s connectivity with PS4 and its big Q4 exclusive, Tearaway.

“We’re really excited for Vita as we move into Christmas,” said senior product manager Ben Law who goes on to say “We’ve got a great campaign with key messaging around new releases like Tearaway, the ever-growing game catalogue and the Remote Play service.”

Naturally, the next generation consoles will feature heavily on letters and lists to Santa so will games to go with it. Let’s face it, it’s no fun only having one game available.

Sony Computer Entertainment UK has stated that all UK retailers are invited to sell PSN games.

The PlayStation firm already allows GAME and independent retailers to sell digital PSN cards for individual titles, and it hopes to roll that out to the entire games retail marketplace.

“We’ve been saying all year that we want retail support for our digital business, we want them to play a part in it to take a slice of it,” said UK MD Fergal Gara, adding “So we’ve got GAME, and then the independent move – which takes us into the rest of the specialist sectors, but our ambitions are broader than that and there are tools for every retailer to take part in that digital business. Not everybody can do that overnight – it is a discussion we have on a regular basis to bring more retailers with us. It’s a work in progress.”

So, you could soon be seeing PSN cards on the racks next to iTunes vouchers and other such things.