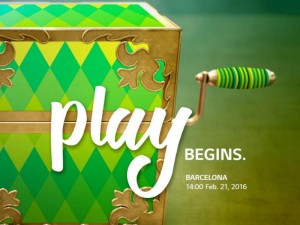 Whilst Vegas is still hosing itself down after CES thoughts are already turning to Mobile World Congress (MWC) 2016 and it appears that LG is on the starting grid early.

LG has squirted out invites letting the lucky recipients know that “Play Begins” on February 21st.

When the G4 landed in April last year it was a good two months after Samsung and HTC revealed the Galaxy S6 and One M9 at MWC respectively so it seems that LG doesn’t want the same to happen this year with its follow up – the G5.

Then again, could there be a new G Flex appearing at MWC as there wasn’t anything at CES.

Let’s face it, the invitation isn’t really giving anything away is it?

Personally, I reckon it has to be an invite for the G5 and, judging by what the leaks and rumours are saying, the G5 will be worth shouting about.

Word is that the new LG smartphone will be loaded with a 5.3-inch QHD screen, Snapdragon 820 processor, 20MP camera and maybe even an iris scanner – a nice bit of one-upmanship on the phones equipped with fingerprint readers.

It is also expected that the LG G5 will follow the likes of Huawei, HTC, and Samsung in ditching the plastic in favour of an all-metal build. I know, this will mean no more leather stitched cases or the diamond-finished plastic cases shown above. I think we’ll survive 😉

Thankfully, we’ve only a few weeks to wait and find out for sure.