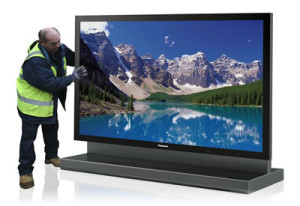 If you are based in the UK and still contemplating getting a plasma tele, or waiting for the digital switch-over before upgrading, then you’d better make up your mind pretty swift like as those large plasma screens, described as “energy-guzzling… 4x4s of the living room” will soon see a UK ban.

Becoming part of Britain’s battle against climate change, ministers have told The Independent on Sunday that “minimum energy performance standards” for televisions are likely to be agreed across Europe this spring.

Just like the apparent panic buying of 100W light bulbs when that phase out was announced there could be a similar rush to order one a monster plasma.

Plasma televisions are said to consume four times as much energy as CRT TVs, with the average for a 42-inch plasma around 822 kilowatt hours a year, compared to 350kWh for the average 42-inch LCD.

The mandatory EU regulations are expected to set minimum standards (complete with an energy rating labelling system) for televisions with the worst performers due to be phased out.