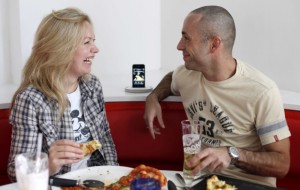 Pizza, to me, is one of the major food groups – along with alcohol and cookies so when there’s a way of making the enjoyment of a pizza restaurant even bettererer then colour me interested!

Well, Pizza Express has gone and installed iPod docks into their booths and installed soundproof domes so your ‘Tool’ doesn’t clash with your neighbour’s ‘Take That’.

The clever docks will also let you choose the lighting as well as your tunes.

Each table has a sound-absorbing dome above it which will make your pizza place an intimate audio area as each dome blocks out the next table’s chatter and, perhaps, critique regarding your taste in music. The science behind this can be seen below.

The lighting can also be used to summon staff, request the bill, or as a do not disturb sign. So, no more owl impressions as you hopefully attempt to attract a waiter or waitresses gaze using the power of your mind – also this could be the end of the ‘scribble-on-hand’ motion when asking for the bill.

The only thing missing seems to be an app that will allow you to place your order from your Apple hand-held and robot staff to bring your Italian meal – doing away with any flesh-and-blood contact with staff.

The first iPizzeria launches in Richmond, which is used as an experimental ‘Living Lab’ where customer feedback will shape future branches of the chain.