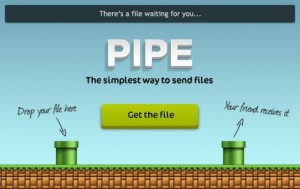 Chances are that you’ve attached a picture or small file to your Facebook message to a friend before now. How about if you could sling a decent-sized file down a Mario Bro’s-esque pipe to them?

Pipe, a Facebook app which has been in beta for about a year now, is finally launching this week to make file transferring easy and possible for the first time on the social network.

This totally revolutionary Facebook app comes from Berlin-based Pipe Dream Technologies who wants it to be possible for you to be able to drag and drop music, documents, video and pictures of up to 1GB in size into a virtual green tube which will be received by your Facebook buddies in real time, even if they don’t have the app or aren’t online.

“There are more than a billion users on Facebook and there is no easy solution to transfer a file from one person to another,” Simon Howell of Pipe told Mashable. “We have taken a function such as attaching a file and turned it into something anyone can use — without ever leaving Facebook. It’s secure and private, and we’re confident it will catch on and spread fast.”

The route to slinging stuff down the pipe is that you’ll access the Pipe app via the Facebook App Center and then select the friend to which you want to send the file. 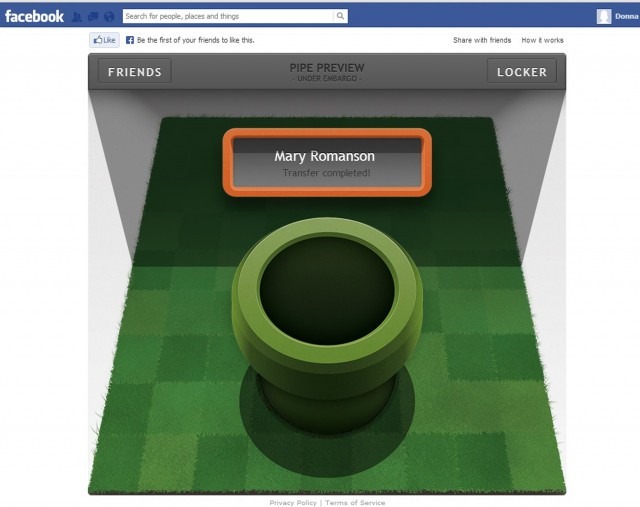 Once you’ve dropped the file down the pipe the person at the other end receives a notification the next time they log in.

If the recipient is offline, the file sits in “a locker,” which can store up to 100 MB, until the person signs on and accesses it. There is no limit to the number of lockers available for each user. Afterward, the recipient can save the file to their desktop and it won’t be archived in the locker.

Files sent via Pipe app never actually pass through Facebook, but rather goes directly from computer to computer with Adobe technology.