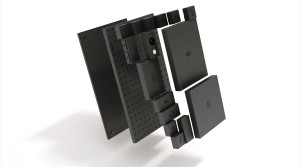 Now, speaking for myself here, I know that my desk is home to at least two other smartphones (there’s an iPhone 4 about to join them after my HTC One is set up). They’re still loved but, perhaps, their retirement was purely down to one or two outdated elements. How cool would it be if I could just update that bit? Phonebloks could be the answer.

The Phonebloks smartphone is a concept which would allow bits and pieces to be updated independently of the rest of the blower.

This isn’t the first modular phone I’ve seen but it tackles the idea in a cool new way.

A higher megapixel camera? Just unplug your current one and slot in the new shooter. That’s the plan for the Phonebloks’ modular design, where each component can be added or removed, and works a little bit like LEGO.

You start with a base circuit board (with peg-like cutouts) which connects each component, with little cubes containing, for instance, the battery or processor, clipping in and all working seamlessly together.

Should a faster processor become available, you then simply purchase that part, and swap out the older cube.

This way you could start with a basic feature phone and then build your device up as and when you have the buying power to purchase more advanced items.

It’s looking specifically at a smartphone design at the moment, but there’s no reason this concept couldn’t be applied to other gadgets, such as tablets or laptops, too.

I think that this is a pretty neat idea, especially for developers, and it also ticks those ecologically and economically friendly boxes too.

Check out the video below for more info.