Phone Numbers? Call me via my Profile Page! 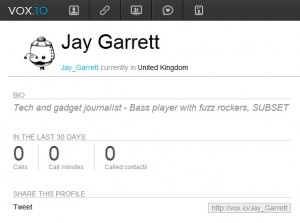 There has been no real need to remember phone numbers for they’re all stored on your mobile – but how about dropping phone numbers altogether? How about a URL instead?

There are those amongst you that would shudder at the thought of having to remember an eleven digit landline phone number. Can any of you actually remember those huge tomes called Phone Books?

When you think about it – Telephones have a historical requirement for designated phone numbers. The thing is, is there a better way of contacting people you want to chat with in the 21st Century?

Most of us are now equipped with mobile phones, computers, laptops and the like. So, do we still need phone numbers?

Tomaž Štolfa, CEO of Vox.io, doesn’t think so: “Phone numbers are dead. If you didn’t have a 130-year legacy of traditional telephony, where would you build a brand-new communication service?”

VoIP is great as it saves plenty-much money, especially when chatting to rels in foreign lands.

Vox.io goes one step further than their rivals as there’s no software to download as the service is run totally via a web browser.

When you sign up to Vox.io you’re given a URL with your name in it. You can then link that account to your current phone.

Now, instead of trying to drunkenly remember your phone number to people you just tell them to head to your Vox.io account. When they find you, all they have to do is press the green button to call for a chat!

This means that if you happen to use your phone for business and have to change your number you wont need to reprint a load of business cards.

The same goes for if you use different numbers when in different countries – just updated your Vox.io page as you go via the iPhone app. As people will be contacting you via your profile page, they won’t even need to know you’ve updated your number.

As Vox.io states: “One of the big changes vox.io brings to real-time communication are vox.io profiles that replace phone numbers. While traveling and using different SIM cards for data access the vox.io iPhone app let’s you change your number on the fly, but your vox.io profile link stays the same. No need for long email signatures or chain messages when you switch your number.”

Could this be the start of using profile pages instead of phone numbers? Could this prevent wrong numbers being dialled or is this system open for abuse?

Give it a Vox.io whirl here.