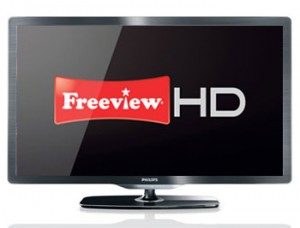 Philips has confirmed that its latest range of HDTVs will feature an in-built Freeview HD tuner.

Not exactly earth-shattering news but this is a first from the Dutch telly maker.

Including integrated Freeview should now put Phillips on a more even keel when buyers are seeking out a new LCD, LED or Plasma TV and start to check out the competition.

Phillips didn’t bother with a Freeview HD tuner in their 2010 television range which put them immediately on the back foot with the likes of LG, Panasonic, Samsung and Sony in the highly competitive HDTV market.

Here in the UK the DVB-T2 high-def digital terrestrial television (DTT) service had already achieved 50% coverage by the middle of 2010 and continues to branch out so owners of Phillips idot boxes were missing out on their HD viewing. The Freeview HD audience had grown a substantial 179% in four months!

More importantly in these times of the crunch you want as many extras as you can and add into the equation that Freeview HD is probably the least expensive (no monthly subscription or installation is required) way to increase the HD viewing love then most would opt for a Freeview packing goggle box.

From here on in all 2011 UK Phillips HDTV models will come equipped with a built-in Freeview HD tuner as well as beefing up the web-connectivity of the new sets with its new internet-connected platform, Smart TV (yeah, really).

Is having Freeview HD already in your telly a nice bonus or a buying consideration? Let me know.