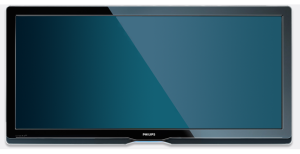 This seems a great idea at first.

No more annoying squished films on a ‘normal’ shaped telebox.

But then, after thinking about this for a little while………

But if you also watch television programmes…………..

Or how about those flicks that aren’t filmed in 2.40:1 (2.40:1 is the aspect ratio of Panavision 70mm film) or the many, many thousands of films shot in less-than-21:9, you’ll get those letterboxes on the side.

You won’t even get to enjoy those IMAX scenes from Dark Knight in their glorious full-frame beauty.

But, saying that, if you’re generally rocking blockbuster films out of your Blu-ray player then this is the TV for you. :OP

Philips is looking at a Spring ’09 release.

There’ll be more to tell in a few weeks so start planning your home-cinema now!