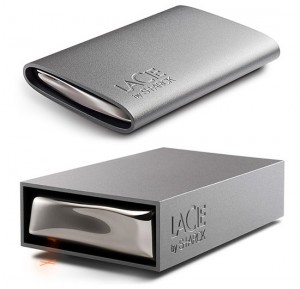 Well, he enjoyed that slice of consumer tech so much he’s only gone over to French hardware manufacturer, LaCie, and added that Starck Je na se qua to some hard drives.

LaCie have a bit of a history of adding some nice aesthetic touches to their well engineered products.

LaCie now have a couple of external hard drives designed by Pip Starck.

How would I describe them?

Well, that would be pointless after Mr Starck pretty much covers everything when he spoke of them thus:

“Technological genius explodes exponentially, each time with incredible power whose limits are yet to be known. The power remains, never abating, symbolically characterised by the sculptural magma that one attempts to cleave, to master within this geometrically perfect strongbox. A symbol of strength mastered, of freedom guided, of incandescent magma heeding to the form of its cast. The interpretation is free. But the mystery remains.”

See what I mean?

The desktop has lovely touch sensitive controls on the front as an added bonus.