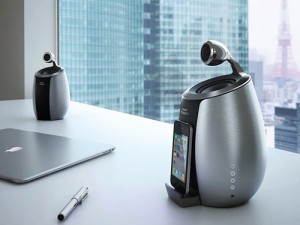 Similar to the earlier versions in terms of design but nearly half the size, the Fidelio SoundSphere Minis retain the outer antenna tweeters, which should give a more roomy, wide soundstage.

More importantly, to me, they look like little one-eyed droids sat waiting for your next command – that’s got to be a good thing, right?

The Fidelio DS6600 has been designed as a desktop PC system, but USB connectivity, a 3.5mm headphone jack and an integrated iPod/iPhone dock that pops out of the bottom of one of the speakers means you shouldn’t have any problem hooking up pretty much any portable audio source.

The SoundSphere Mini can play from your docked iPod or iPhone, whilst charging it, of course. It may be worth waiting a little as iOS 6 has now been unveiled and so iPhone 5 must be around the corner and that is said to have a different dock connector.

The twin speakers may be smaller than its sibling but they still pack a powerful yet accurate audio punch thanks to the 25mm soft dome tweeters and 68mm mid/bass drivers all being kept separate in that functional but oddly attractive body.