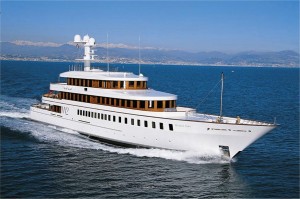 World renowned French designer, Philippe Starck has revealed that he has been working on a “revolutionary” and probably the most expensive new Apple product – ever.

Starck, who has designed some of the most tastefully minimalist gear known (the Zikmu iPod dock and LaCie drives to name a couple) , let the news slip during an interview with France Info.

He claimed that the new iThingy would be revealed soon: “Indeed, there is a big project together which will be out in eight months,” he said.

Thanks to Apple’s “religious cult of secrecy” he refused to go in to any more detail which then had the interwebs alight with feverourish guessing as to what this project could be.

Could the much-rumoured Apple HD TV by sporting a Starck design? Perhaps some Apple-friendly high-end furniture?

Well, guess no longer fanboys and girls. Philippe’s sketching was for a toy that would not fit in your home, let alone your pocket.

Apparently Starck was designing a yacht for the Jobs family and, no, it wont be on display in a blister pack in any of the Apple Stores.

An Apple spokesperson told AllThingsD that Starck isn’t working on any actual Apple products but he was said to be working with iSteve and Dutch ship maker Feadship to design a luxury yacht for the jeans and jumper-clad Apple head honcho.

Steve Jobs always wanted to design his own yacht, and had started work on it in 2009.

Someone as picky as Jobs would always turn to someone that could match his love for unfussy and timeless design and so enlisted the legendary French designer to help. This would explain Starck’s regular trips to Cupertino to meet with Jobs’ wife, Laurene, as the project progressed.

Starck has worked with Feadship on other yacht designs, including the Wedge Too, which you can see above.

The iYacht (or whatever it will be called) would indeed be a sleek and minimalist craft complete with 40-foot-long glass walls.

Chances are, if it follows other Apple designs, anyone will be able to get behind the wheel and work out how to take it on a voyage – I hope that it has a multitouch retina-screened control panel 😉