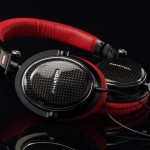 The quickest way to make anything look hi performance, modern and cutting edge is to construct it from carbon fibre.

This even works with a pair of studio grade cans!

These are Phiatonâ€™s latest model weighing in at a mere 6.5oz.

To keep the weight down Phiaton have made the MS-400 from carbon graphite fibre encased in a double-shell high polymer enclosure.

They also say that they have worked on the airflow, optimizing it to deliver â€œconcert hall sound qualityâ€.

The MS 400 features flexible joints that fold in two steps making it perfect forÂ mobile studioÂ engineersÂ (kinda like the PortaPro’s that rock with my iPhone).

Light doesn’t mean cheap at $249 but if they perform like top-level studio headphones then it’s not that expensive really when you compare them with other top end monitor cans on the market.

I’d love to test them in a studio environment so…….if I could try a pair…… 😉