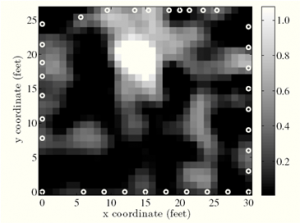 Really though; researchers at the University of Utah have actually developed a way to use wireless signals to detect movement through solid walls and doors!

This comes to being from what’s called variance-based radio tomographic imaging.

The clever-clogs process signals from a 34-node IEEE 802.15.4 wireless network which happens to be the protocol for personal area networks used by home automation systems such as ZigBee.

The idea is fairly straightforward believe it or not.

The signal strength at any point in a network is the sum of all the paths the radio waves can take to get to the receiver.

So – Any change in the volume of space through which the signals pass, for example caused by the movement of a person, makes the signal strength vary.

This means by “interrogating” this volume of space with many signals, picked up by multiple receivers you’re able to build up a picture of the movement within it.

Those researchers/voyeurs, call them what you will, were able to detect movement in a room to within a meter or so, which is pretty good.

Rest assured that they can’t see what you look like in the shower…………….. yet.