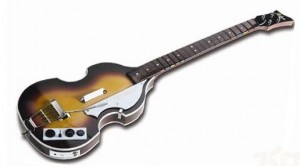 We’ve already seen John Lennon and George Harrison‘s guitars for the upcoming Beatles-themed version of Rock Band and I think everyone has been expecting Paul McCartney‘s little HÃ¶fner violin bass to turn up.

Kotaku’s got the goods in pictorial form and here is the wireless bass controller.

It will be sold in the limited edition premium bundle of the game for Â£179, along with Lennon’s Rickenbacker 325, George Harrison’s Gretsch Duo-Jet, and Ringo Starr‘s pearl-finished Ludwig drums.

EA’s The Beatles: Rock Band will launch on September the 9th on PS3, Wii and Xbox 360.