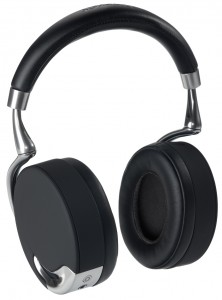 Parrot is known for some pretty special gear as well as loving audio and now they’re getting ready to launch their first set of wireless headphones. Say bonjour to the Parrot ZIK headphones.

The French tech firm has unveiled its first wireless audio and telephony headphones, known as ZIK, which will be available in July. These possibly pack the most gadgetry I’ve ever seen in a set of headphones!

The ZIK are designed by prolific product protagonist Philippe Starck who has designed everything from a luxury yacht for Steve Jobs to nifty hard drives.

The Parrot cans are pretty much state-of-the-art and for £349 they rightly boast high performance active noise controls as well as an earpad equipped with a touch-sensitive control panel. It’s on the right-hand side just in case you were curious.

Where the gesture controls may be a neat touch the jawbone vibration bone conduction sensor sounds marginally weird. This actually lets you take hands-free calls with perfect mic and speaker levels.

The head detection is a cool addition as it pauses music when you remove the headphones, but starts it again once you’ve put them back on.

The Parrot ZIK also integrates NFC (Near Field Communication) technology to allow simple Bluetooth pairing, thanks to a tag located on the left headset – so all you need do is touch your device to the left ear and it’ll be paried instantly. Parrot are claiming this as a headphone first.

If the 24 hour battery runs down simply plug in the supplied audio cable and listen the old fashioned way, minus active noise cancelling obviously.