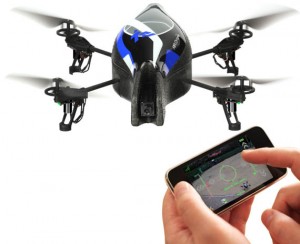 Remember that very cool quad-rotor equipped iPhone guided flying machine from Parrot I wrote about back in January – The AR.Drone?

Well, it has now been officially announced that it will land in the UK on August 18th.

If you recall, the Parrot AR.Drone is controlled by the handlers iPhone or iPod Touch – you don’t even have to be in the same room or actually see the AR.Drone as live pics are beamed back to your handset via the quadricopter’s two video cameras 🙂

The images that hit your Apple device can also be overlaid with augmented reality courses and a variety of games that involve shooting robots, dodging lasers and dog-fighting with another chopper.

Being AR thereâ€™s every chance that you could fly against anyone, anywhere in the world!

Thankfully the AR.Drone has an inbuilt autopilot should things go a bit pear-shaped or your iPhone loses signal.

I would’ve expected more than 12 minutes flight-time per charge but that’s what you get.

The “affordable” asking price they bandied about 6 months ago for the Parrot AR.Drone turns out to be a wallet whimpering Â£299!

Still, August is quite close to Christmas if you can wait and have very reasonable parents/friends/partners 😉

Nip over to the site for more info.