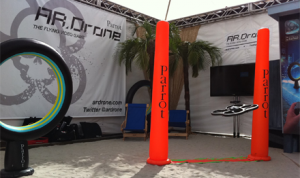 Remember Parrot’s remarkable iPhone/iPod Touch controllable flying machine the AR Drone? Well, now you owners of Android, Symbian and bada devices can get in on the action.

The mobile OS love-in at E3 was followed by Parrot’s announcement that they have released a software development kit (SKD) so that developers can create new applications for AR Drone across iOS, Android, bada and Symbian. In addition, Parrot announced AR Race, a race game which supports one to four pilots.

AR race is more than a free app (available today in the App Store) for creating custom circuits to race your Drone. Thereâ€™s actually physical accessories (available at parrotshopping.com) for your courses such as pylons and donuts as well as useful stuff such as batteries and spare body parts just in case you are as skilled as me 😉

The close of Parrotâ€™s E3 announcement is the AR Drone Challenges which are set to start on June 24th. After registering at ardrone.com (that’s AR Drone not ‘Ard One!) participants will have three video challenges where theyâ€™ll have to film their flying skills. The top 14 win a spot in the grand international final, set to take place in Paris on October 1st 2011.

Check out the very cool video below 🙂