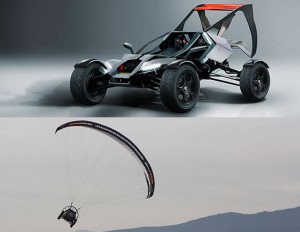 If the Terrafugia flying car is a bit…. odd looking and you’d rather have something a tad more Mad Max – say hello to the British-developed Parajet Skycar and its groovy redesigned self!

Better still; it’s available for pre-order with a release date pencilled in for 2010!

A previous incarnation of the Skycar was actually flown 6,000 miles from London to Timbuktu by a team led by former British Army officer Neil Laughton.

The beauty of the Skyjet is its simplicity.

Basically, what you have is a dune buggy strapped to a ram-air (self-inflating) Paramania Reflex wing, as used by paragliders.

All the grunt actually comes from the Yamaha R1 motorcycle engine – in car mode that block will hurtle the Skyjet from 0-62mph in 4.2 seconds and on to a theoretical top speed of 140mph.

The vehicle’s take-off speed is 37mph. Once airborne, it can reach a top speed of 100mph, has a range of 200 miles providing you adhere to a cruising speed of 82mph and it can reach a max altitude of 15,000ft.

Should anything ‘Aaaaaaaaaaaaaaaaaaaargh!’ happen there is an emergency ballistic reserve parachute waiting to be deployed.

If you happen to have Â£10,000 and fancy flying a buggy around then you can go and reserve a Skycar now from the Parajet Automotive Web site – you will still have a balance of Â£50,000 to find once you get delivery in late 2010.

Parajet says deposits are fully refundable and can be sold on to other people who might want to buy your place in the queue in the future.

Would you fancy one then?

Jump to the preorder page!