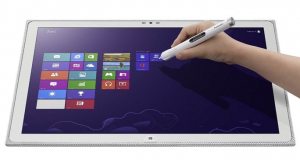 The Panasonic Toughpad 4K, which is described as being “the world’s first” 20-inch tablet with an Ultra HD (4K) resolution, has met its public and now has a price tag.

Unless you’re really fussy about the resolution of your tablet then, chances are, you won’t be buying the Toughpad 4K to check the footy scores or updating your Facebook or Twitter feeds.

The new Panasonic slate is gunning for businesses such as museums and the like. It displays a crystal-clear 3,840 x 2,560 pixel resolution, and comes clothed in a rugged, carbon-fiber case designed to withstand a lot of public abuse.

In one of the demos set up by Panasonic, the Toughpad was in museum-ready mode, letting users zoom into a high-resolution image of an exhibit, as well as rotate it from all angles.

Under the hood of the Toughpad 4K is an Intel Core i5 vPro processor, 8 GB of memory, Nvidia GeForce graphics and 256 GB of storage. That’s pretty darned special for a tablet.

The Panasonic Toughpad 4K will be available in Europe this November at a price of €4,500