Panasonic slipping out their 20-inch 4K tablet next week 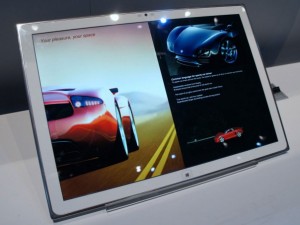 Panasonic unveiled its beast of an 20-inch 4K tablet at CES back in January, but now it looks set to return with a vengeance – leaner and meaner.

The behemoth weighed in at a hefty 2.5kg at CES but now the 20-incher is being described as the world’s thinnest and lightest tablet.

That can only mean that Panasonic has been getting the slate to be more tablet than table by slicing of the pounds in order to get it fighting fit.

Hopefully the weight loss hasn’t meant skimping on the original internals – a 1.5GHz Intel i5 processor, Nvidia GPU, 4GB of RAM and a 128GB SSD.

But with a 4K display and a huge screen size, it’ll be hard not to be impressed by the ‘portable’ ultra HD tablet.

Stay tuned for the start of IFA on 6 September, to see if Panasonic’s giant Windows 8 tablet will finally get a street date and price tag.

Digital Trends has already been hands-on with the humongous tablet – that’s where the image above comes from.