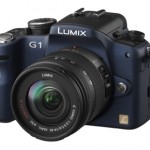 Cast your minds back to September 12th where I wrote about the new Panasonic Lumix G1.

Well, I’ve spent a week with the clever four-thirds camera and have been pleasantly surprised.

I’m not a photographer; never claimed to be, and probably never will be classed as such – but I do enjoy taking snaps.

So, for me, a nice compact such as the Panasonic TZ-5 is a very great cam and does the job pretty damn well.

On opening the box of the G1 there were 2 lenses and a body – now this made me very scared indeed!

Chris, my bro, writes a blog about DSLRs and the dark art that is real photography so I generally leave the clever stuff to him.

But after popping over to Primrose Hill with about Â£700 worth of kit and an uncertainty of how to use any of it I was releived to find that the camera is really easy to use and that the optional zoom was fantastic!

The body was light and the whole kit (body and 2 lenses) hardly took up any space in my man-bag.

I could see that people with smaller hands, people travelling but want a “proper” camera and people like me that would like to try DSLR’s but put off by their complexity, size, weight and cost will love this.

The construction of the thing is top-notch.Â  It has a metal chassis and feels really top-end, as do the lenses.

A little mentioned point is the fact that the large screen flips out and can be twisted so that over-head shots at gigs/”Hail Mary” paparazzi shots can be taken or indeed help avoid the need to lay on the floor to take ground-level photos.

It of course has a full manual mode for those that know what they’re doing but also a lot of toys such as stability control, etc as well as the full iA auto.

Panasonic plan on releasing some more lenses as well as an adapter which will open up the choice no end.

For the more fashion conscious it will also come in 3 colours – Red, Blue and naturally black.

A bit of news – there will in the future be a HD model that will take HD video: Another World’s First. This has generally not been possible with “system cameras” as there is an auto-focus lens problem but the G1 HD (perhaps it’ll have a different name by then) will have a special lens.Â  You heard that here first 😉