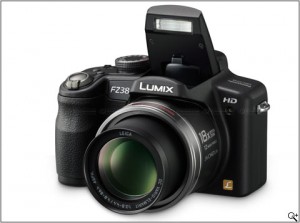 I have a soft spot for Panasonic cameras and now they’ve announced that it is updating its FZ28 model with a new version packing an 18x optical super zoom.

The new snapper was announced on Monday and is named the DMC-FZ35 in the US and the DMC-FZ38 in the UK – slightly confusing for the likes of me!

The camera will offer a 27mm wide-angle lens with an 18x optical zoom lens equivalent of 27-468mm.

The 12.1 mega pixel-FZ35/FZ38 will dish out an upgraded POWER Optical Image Stabilizer (O.I.S.), which allows for double the repression power compared to the conventional image stabilisation system, MEGA O.I.S., and ultra high-speed Auto Focus (AF) for capturing action scenes as they happen.

Talking bout catching the action – this clever cam will shoot HD video and comes with a dedicated button and controls.

Other stuff crammed into the new DMC includes an Intelligent Auto (iA) Mode, Face Detection, Intelligent Scene Selector, Intelligent Exposure and Face Recognition…. and so on.

Great stuff if you’re rubbish with names – Panasonic says that it has improved the Face Recognition gadget with the FZ35/FZ38 being able to recognise up to three faces simultaneously.

Users will be able to set the age of family members and when babies under 3 years-old are registered, the camera will automatically switch to Baby mode if the baby appears to be in the frame. Awwww!

The LUMIX DMC-FZ35 will have a suggested retail price of $399.99 in the US and will be available in September 2009 in black.

The UK variant, which appears to offering identical specs, albeit called the DMC-FZ38, will cost Â£329.99