Palm Pre – Get The Low Down 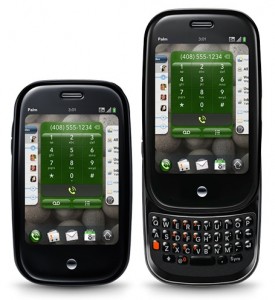 When Palm launched its Pre last week at CES it caused quite a stir.

As well as the new hardware, the company also demo’d a completely original operating system called webOS which incorporates some pretty coolÂ stuff.

So, let’s have a look at this brand new offering from Palm then starting with…….

Palm have done a top job on the handset.

It has a curvy, sleek,Â glossy bodyÂ andÂ the 3.1-inch capacitive touchscreen is flush with the face of the device, just like the iPhone or Touch Diamond.

When you slide out the QWERTY keyboard, it has an almost banana-like shape to it, curving slightly to meet the contours of your hand and face.Â

It’s slightly smaller than an iPhone when closed, slightly larger when open, and roughly the same width.

In the center of that space is a small metallic ball, which looks like a movable trackball, but is actually just a button.

The resolution is the same as Apple’s device (480 x 320), though due to its smaller size, it has slightly higher pixel density.

You get the important 3.5mm headphone jack.

A MicroUSB port lets your charge the phone or work with files for the device, though Palm is also somewhat psyched on its Touchstone, a inductive charger that lets you just place the phone atop it for power (it even snaps into place thanks to a few well-placed magnets). The Touchstone seems like it will be sold separately, but how cool is that!

Around back there’s a 3 megapixel snapper with LED flash.

No MicroSD Slot though – TheÂ Pre won’t have expandable storage.

The phone has an AGPS chip, and looks like it will come with dedicated navigation software on-board (if Palm’s official UI pics are any indication).

Let’sÂ have a gander at thisÂ webOS, the operating system Palm has developed based on Linux.

“The UI itself is absurdly slick” – That’s how Engadget start!

Putting it on aÂ par with the iPhone’s interface and HTC’s TouchFlo 3D.

Smooth zooms, transitions, and fades in and out of content, and there’s no noticeable lag or stutter when moving through actions.Â

AÂ notable point madeÂ is that you never leave the application you’re inÂ when you open another.

There’s something that Palm calls Synergy, which allows you to pull together contacts and calendars from lots of different sources, but without altering or merging that data.

So you can grab the same contact from Facebook, Gmail, and Outlook, then combine those into a “stack” of info for that person on your phone. It looks for duped data, so you don’t get doubles of phone numbers or names.

The long and short of it is this: the Palm Pre and webOS are the first real challengers to the iPhone’s innovative approach to a mobile UI and data management.

It evenÂ has copy and paste functions (triggered by holding down your thumb on the gesture area and selecting your text with another finger)!Â  C’mon Apple!!

The prices at the mo range from $399 for an unlocked handset, to $149 under contract.

The release of the phone is slated for the “first half of 2009,” which means we could see it in a week, or in June.

So, unless Palm is having major issues, it’s reasonable to believe we will see the phone on shelves before Summer.