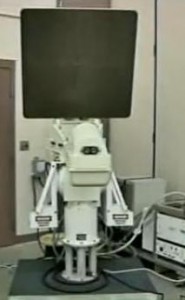 These cops seem to be having way too much fun with this but officials from a US prison have been showing off their newest crowd control weapon.

The device being tested in the prison system is a scaled down version of the Active Denial System also built by Raytheon, but for the Pentagon.

The mean machine, which is produced by Raytheon Missile Systems, was put through its paces at Pitchess Detention Center in California.

This handy tool allows prison guards to zap cons from the comfort of a secure room and operate it with a joystick without ever having to leave their coffee and doughnuts just to face an unruly inmates.

Mike Booen, a vice president of Raytheon, told NPR that “It penetrates about a 64th of an inch under your skin. That’s about where your pain receptacles are.”

Brian Day, a reporter with the Pasadena Star, didn’t much care for being on the receiving end as he recalled “At first, it’s a warmth,” he says. “Then it becomes an intense burning sensation real quick.” When I volunteered, the guards hit me first in the arm, and stronger, in the neck. Ten minutes later, I swear I could still feel the pain.

Dave Judge from the sheriff’s department reckons that’s the whole point – “That’s the mind and that’s the memory,” “We all tend to imprint a discomfort. So you burn that sensation in your mind, which is a positive thing, because we want individuals to remember that. So if they’re inclined to do [something wrong], they think twice and not do it.”

Watch the big kids hurting each other below 😉