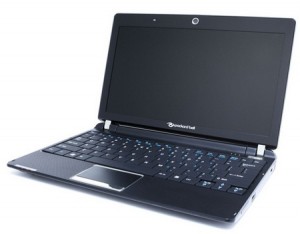 Packard Bell seem to be getting some rebranding thanks to Acer – their parent company Acer.

Today PB confirmed that they would be offering the dot netbook to UK customers and put a price on them.

The dot m is the 11.6 inch model and is built on the Acer Aspire One 751 chassis – the eagle-eyed of you may have spotted the keyboard and hinges as tell-tale signs. The specs are similar too, but the dot m gets an AMD Athlon L1110, up to 2GB RAM, 320GB hard drive but then it’s same-old same-old.

The dot m also comes with Bluetooth and the promise of integrated 3G and Windows Vista. The dot m should be available in July costing Â£349.

Packard Bell confirm that an Intel version of the m will also be available.

The dot has a 10.1 inch screen and sports the normal netbook specs of Intel Atom N280 processor, 1GB RAM and 160GB hard drive. As with most netbooks, the dot s will ship with Windows XP.

Again the dot s comes with the promise of embedded 3G – probably best to expect a price hike from but we don’t know what difference that will make to the “from” price of Â£249.

All models should be available in July.