Own your own real Batmobile 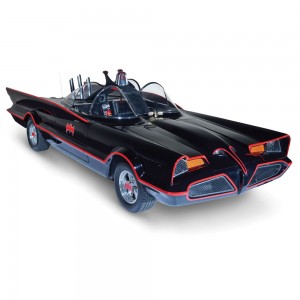 This is a must for any Batfans. An Authentic 1966 Batmobile that you can order now and then drive to work in.

This full-size Batmobile is now on offer from Hammacher Schlemmer and sounds as though it should be true to the original.

It takes a year to make, although the original was knocked-together in three weeks, and is an officially licensed, roadworthy replica of the Batmobile as featured in the 1960s TV show.

This Batmobile is built on a custom Lincoln chassis, (the original was built around a Lincoln/Ford Futura), with a 430-horsepower, 383 Blueprint Crate engine and a Monster TH350 automatic transmission.

It has a rear-facing propane tank that creates the afterburner effect and the vehicle’s cockpit has a blinking Batphone, switch-operated electric actuators that open the hood and trunk, and a spinning red light like any good law enforcer’s vehicle.

That’s not all. You get a glowing detect-a-scope screen, a Batbeam ray that rises from a hood-mounted antenna, and rear parachute packs.

The vehicle’s exterior is just as impressive with the instantly recognisable bubble-canopy windshields and chrome “rocket” tubes at the rear.

Personally, I’d strap a Snolo Stealth-X sledge to the back as well, ready for the snow 😉