Overclock your Graphics Card via the Afterburner Android App! 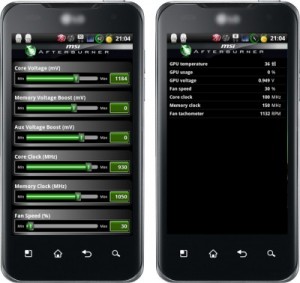 Speaking as someone that has always preferred to play games whilst watching my brother and cousin work out the coding to make their own games – the world of overclocking seems a mysterious and dark art.

Imagine if there was an app that enabled you to alter a few settings and, hey presto, one overclocked computer? Job done.

MSI has just unveiled just that at Computex.

Their Afterburner Android app is a GPU tool which lets you keep an eye on the temperature, voltage and fan speed of your graphics card via your Android mobile and a WiFi connection.

You are also able to overclock and overvolt that thing to your heart’s content – or within the boundries of your puter any how.

That’s as far as I’m able to make out – but, apparently, it’s planned that the app will soon work with GPUs from other companies as well as there being an iOS version in the not too distant future.