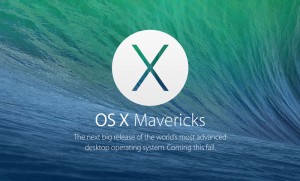 Apple has announced that OS X Mavericks, the next version of its Macintosh operating system, will land today for free!

Of course, there’s the usual promise of increased speed and efficiency but it will also dish out enhanced multiple-monitor support, big improvements to the Notification Center (which includes inline replies), an improved Finder, better power management, and improved performance in Safari.

Mavericks also includes a number of brand new features, including a new iCloud Keychain function to save passwords across iOS and Mac devices, new Mac apps for iBooks and Apple Maps, along with UI redesigns for a number of built-in applications.

The free update is available to everyone running OS X 10.6 Snow Leopard and above.

It’s worth noting that the discount doesn’t extend to OS X Server. The latest Server 3.0 requires Mavericks and will be available as a $19.99 upgrade from the Mac App Store