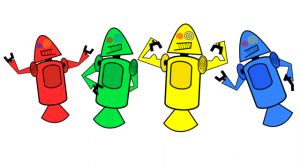 Google’s little green android seems to have won many fans and is popular enough to have a whole range of collectables in the little droid’s image. It could have been very different.

The cute Google Android is now a well-known tech icon. But these pictures, the original concept drawings for the Android mascot, show what could have been if Google hadn’t used a talented designer to tidy things up.

Posted on Google+ by Google’s Dan Morrill, these are the first mascot designs ever produced for Android.

They were produced in Inkscape over “a couple hours” and were destined for an internal presentation which introduced Android APIs to Google’s developers.

The general ideas seemed to go down well but, thankfully, the actual end job went to professional designer Irina Blok.