Order Your Mac, iPad, iPhone or iPod via Apple Store app and Pick Up in 12 minutes 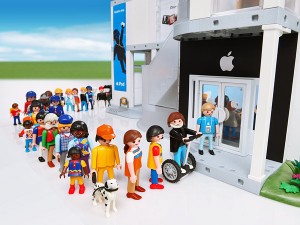 Fed up queuing and having to wait before you can get your mits on something from the Apple Store? Thursday will see a new app which will make it even easier and quicker to spend more at the fruity retailers chapels of tech.

The new Apple Store app will reportedly be released tomorrow and will enable you to order a product via your iDevice and then pick up your goodies from an Apple Store a mere 12 minutes later! Uh oh! 😛

According to the ever present “trusted source” here’s how it will work:

Choose your item and, if it’s in stock, it’ll be ready to pick up 12 minutes later. Apparently it takes three minutes for the order to go to the designated Apple Store, then Apple’s backroom staff have two minutes to pick it out. That means they have a seven minute cushion just in case things aren’t where they should be, etc. You pay via the app which means if all is good you just have to wander in, point and laugh at the queuing plebs, sign for your product, and leave with your new shiny toy.

If your desired item happens not to be stocked you’ll be given a delivery date. Everything you pick up from an Apple Store has free delivery so that’s ok. You’ll get a push notification through the app when it’s available and 12 minutes later you can pick it up.

The smugness continues as when you order through the app you’ll get preferential treatment in store. This is great until everyone that shops at Apple uses the app – then there’ll surely be queues of people coming in to collect their orders – kinda like Argos on a Saturday afternoon.

I like the self-service idea of being able to scan products yourself using your iThingy’s camera in the app. After you’ve scanned what you want click Purchase and it’ll charge your credit card.

All of a sudden it’s even easier for Apple to get your cash!

Do you like this or do you think that this will inevitably lead to fewer staff in store?