Orange Apples! iPhone 3Gs – End of an Era or Start of Something Better? 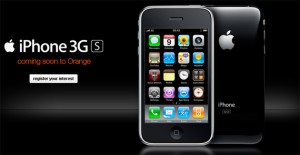 The days of O2’s exclusivity on Apple‘s iPhone has always been assumed to be numbered.

Today that day seems to have arrived as Orange has officially confirmed it will be offering the iPhone 3GS online and in its stores later this year.

This isn’t really a shock as I reported that Orange had been in talks back in May 2008 regarding the iPhone 3G.

Prices, tariffs and availability dates are yet to be announced but Orange has launched a Web site for people to register their interest in the meantime, at orange.co.uk/iPhone.

The 3G coverage maps (see in the gallery) were published by Ofcom and highlighted its reason for giving O2 a slap on the wrist and warning the network that its 3G licence could be revoked if it didn’t sort itself out.

Is coverage enough to tempt buyers?

Personally I think people will still be checking the bottom line and Orange coming on-board may give O2’s pricing structure a kick in the pants.

Perhaps the silly thing of having to buy yourself out of your existing 18 month iPhone 3G contract to get the 3Gs may get dropped or will Orange do a deal if you swap over to them?

O2 has posted their response on their blog:

Weâ€™re proud that weâ€™ve been able to offer an exclusive iPhone deal to our 20 million customers for the last two years. We always knew that iPhone exclusivity was for a limited period of time, but our relationship with Apple continues and will be an ongoing success. We have over 1million iPhone customers and they remain very important to us.

We aim to offer our customers the best devices on the market, including becoming the home of Smartphones and we are really pleased to now add another device in the Palm Pre. We also offer award-winning customer service and benefits, which is why more people choose O2 than any other network in the UK.

So – does this make much difference to your buying decision?

Are you more likely to go the way of the iPhone?