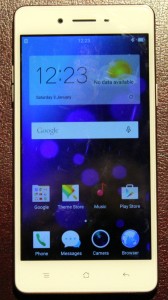 The Oppo F1 smartphone was brought to a gathering of Oppo fans aboard a boat on the Thames. Whilst the F Series phones are aimed at the mid-range market, this new smartphone may well have ideas above its station, but manages to keep the price remarkably affordable.

Oppo has created quite a name for itself amongst the smartphone community for not only being able to release decent hardware at a very reasonable price point but for producing some great camera phones.

The Oppo F1 is wrapped up in a sleek aluminum body that is polished to give it a finish you just want to hold and move around in your hand caress. It is more than a little reminiscent of the iPhone – quite the feat as the Oppo costs around a third of the price of an iPhone.

The face of the F1 is protected by 2.5D Gorilla Glass, while the edges have been chamfered to a 60-degree angle. It may sound like the usual press release fluff and nonsense but all of that goes towards making this a nice phone to hold. And it’s light. Crazy light. 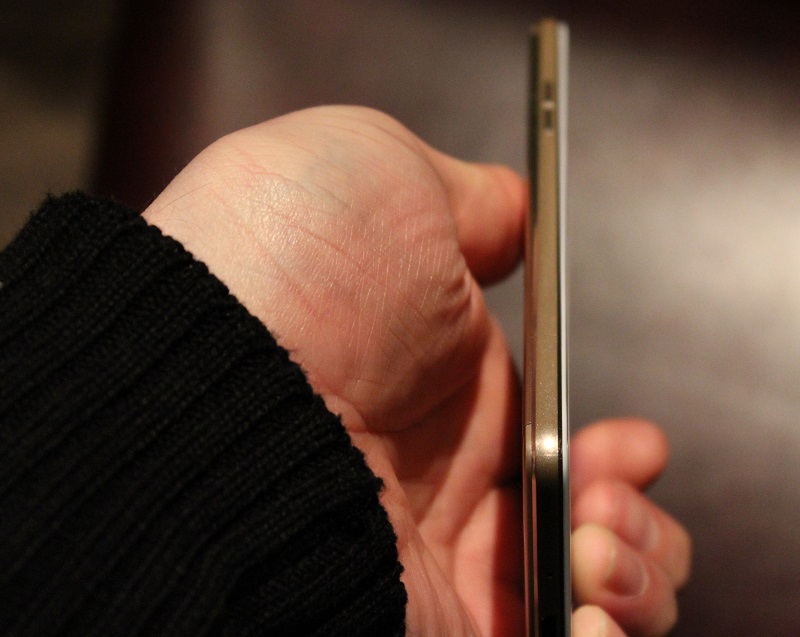 It’s 7.3mm thin and is a feather-light 134g. The rounded edges and sides have a plastic-like quality to them and I am guessing they’ll act like bumpers.

The 5-inch screen did look a little small after I have been using a Nexus 6P as my daily driver but the Oppo F1 looks and feels right and, if I am honest, 5-inches is all you really need (no sniggering at the back there!).

Everything was looking and sounding good until I discovered where Oppo managed to save some money – the display on the F1 clocks in at 720p resolution. Yes, it’s fine for browsing the Web and navigating around the phone but it isn’t so great when it comes to checking out your recently taken pictures or playing videos back.

Oppo has kept up with the camera tech though and seems to have paid special attention to the front-facing selfie cam.

According to Oppo’s research, the front cams are used more often than rear cams these days – I am guessing that depends on which country they conducted the research, and what their target age group is. With those results I can at least guess the latter is a darned sight younger than I. 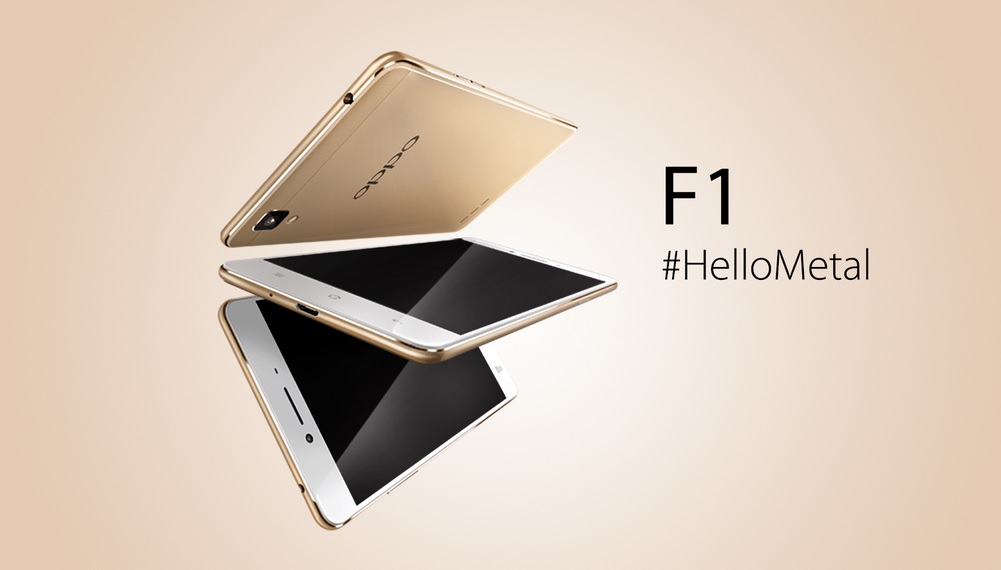 Anyhow, the front snapper is equipped with an f/2.0 aperture and 8-megapixel sensor which work really well together. Taking a few test selfies in the chilly London evening air produced impressive results – especially given the test subject.

The amount of light allowed in to the sensor makes shooting yourself (so to speak) in poor light a possibility. There’s no front flash but the screen will light up in order to illuminate your visage.

The now expected beauty mode isn’t that invasive either, and has three different settings, ranging from natural to… extreme makeover.

The LG-esque selfie gesture control works really well. Rather than contort your hand to tap the shutter release without getting your limbs in shot, you raise your hand in front of the camera. The Oppo way differs in that, instead of making a fist like on an LG phone, the Oppo simply activates a timer when it sees your open palm. Even in challenging lighting, this method worked each time.

What I would class as the main camera (sorry Oppo) is kitted out with a 13-megapixel sensor built by Samsung. It was hard to get a true idea of its performance as the light inside the room was a bit odd and it was getting too darned cold for me to keep nipping out to take some snaps. Not only that, there’s the small matter of that 720p screen. 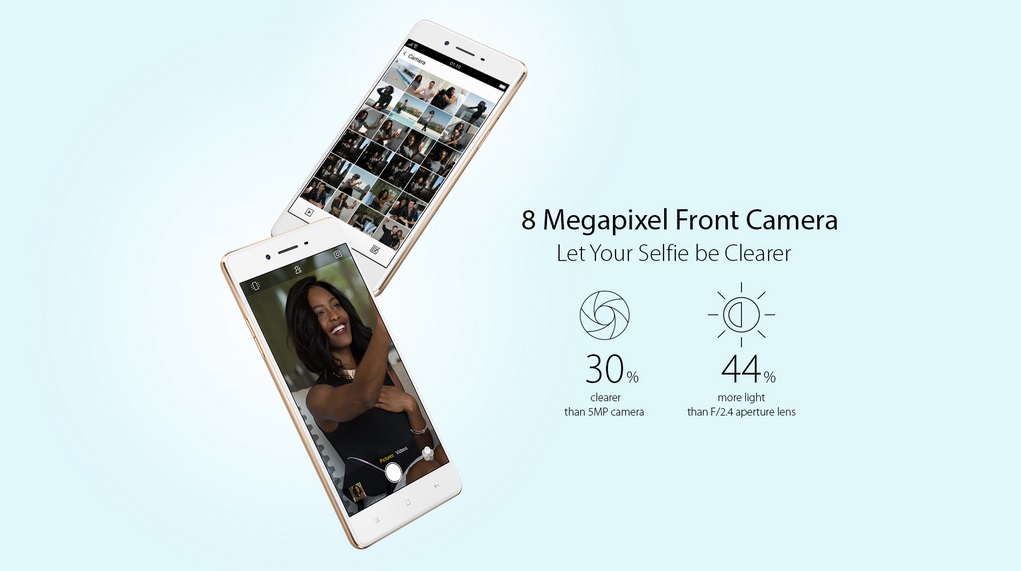 What I did notice is the Slow Shutter mode. This would need a tripod or at least a hand that isn’t shaking due to the cold but I can imagine that this would be able to capture some great shots – especially of the lights of London from the river.

The Ultra HD mode promises to combine several images to come up with a single 50-megapixel photo but trying to discern any improvement using that 720p screen was a bit of a lost cause. Perhaps if you slung them up on your big telly you’d see the benefit.

Oppo appears to use its own take on digital stabilisation. Oppo’s way is to take six stills each time the shutter is activated, from which the Oppo F1 chooses what it thinks is the best for you. The idea is, one of those six will be the most in-focus, or steadiest, and that’s the only one you’ll want to see. It’s a feature that runs in the background, so you’ll have to trust the software is making the right decision.

Oppo F1 under the hood

The F1 is running Android 5.1 which is skinned with Oppo’s ColorOS user interface.

Like the Huawei EMUI , you loose the app tray and the notification draw has been modified but I am pleased to report that there’s almost no bloatware or useless pre-installed apps. I was impressed by just how smooth and fast this thing flicks along. 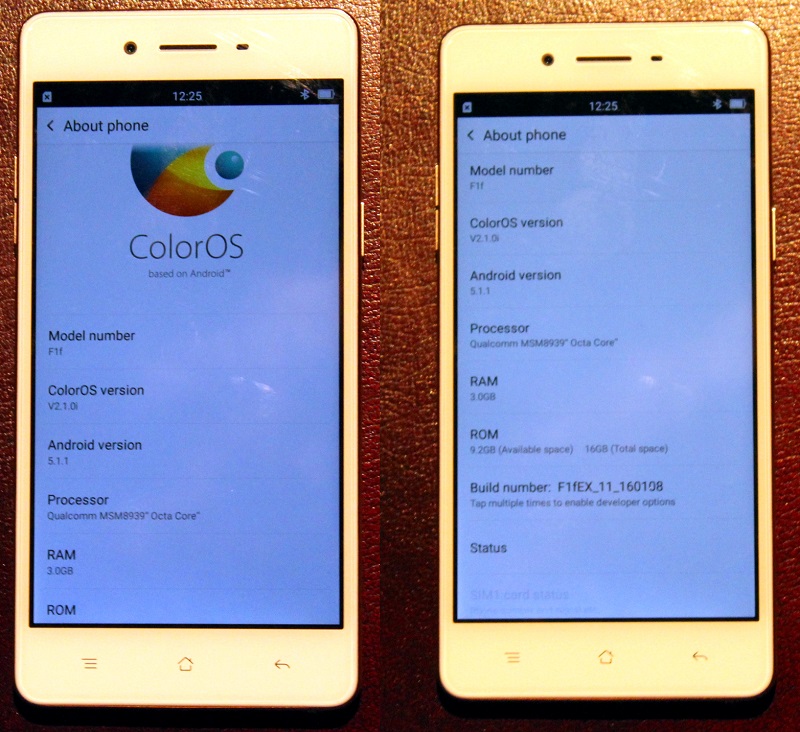 Qualcomm’s Snapdragon 616 processor and 3GB of RAM lurks within that skinny shell which seems to work perfectly for the mid-range F1.

There’s a MicroSD card slot to increase its internal 16GB storage to 128GB which is always a nice touch.

The Oppo F1 feels like a phone at least twice its price.

With a metal build and gold finish that makes a statement, the F1 doesn’t feel like a budget phone. The hardware might not be as fast as others out there, but the cameras could make up for that – especially if you’re a selfie junkie.

With the F1 available to pre-order now, you’ve got until launch day at the end of February to decide if £170 for the Oppo F1 is an offer just too good to miss.

I’d definitely be interested in taking the Oppo F1 for a full test.