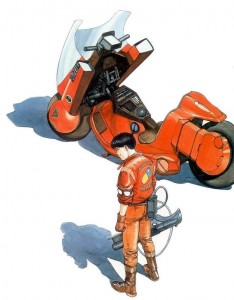 I can’t contain my excitement!

Akira; the first Manga film that I ever saw and the one that lead me to collect so many videos (remember those anyone?) is heading to the big screen by all accounts.

The remake rumours have heated up again after the initial flurry when the rights were bought by Leonardo DiCaprioâ€™s production company, Appian Way, back in 2008.

Now more word of a live reboot of the 1988 anime flick has started bubbling since New York Magazine wrote that he studio was in negotiations with the Hughes Brothers (who directed â€œThe Book Of Eliâ€) to direct the movie back in February.

There seems to be various Japanese sites reporting that there’ll not only be one live-action Akira film controlled by the Hughes brothers but two – covering the six volumes.

Albert Hughes is quoted as saying that heâ€™s a huge fan of the original anime and that heâ€™s currently busy creating storyboards and writing the plot.

No official noises coming from either Appian Way or co-producer Warner Bros. at the moment though.