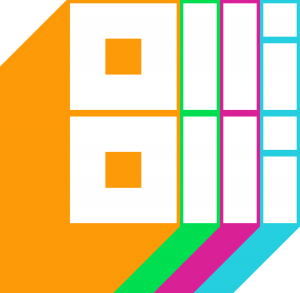 Anyone who visits us regularly will know that we’ve been championing OlliOlli for a long time. Our first impressions playing it on a rooftop in Soho were great and our time on it at Eurogamer was even more so.

We were privileged to see the game very close to its final build at the Roll 7 offices on a cold night in November and I remember walking away from that building thinking: “Wouldn’t it be great if everyone in life put that much passion into what they were doing?“.

I came away addicted, hoping it wouldn’t be too long before my next hit of OlliOlli, but more importantly I came away inspired.

However, this is where the problem lies. The guys at Roll 7 are awesome guys. Consistently nice, cool and inspiring to be around. But as a reviewer, I have to put aside the fact that they are nice guys. It is vital. So no matter how awkward it could potentially become, I have to judge the finished version of OlliOlli purely for the game that it is, nothing more and nothing less.

It’s because of that that I say thank f@!#, because OlliOlli is hands down, the most addictive PS Vita game you will play all year.

In fact, hands down is probably the wrong expression, because you won’t be able to put this game down. The finished article has not only realised its early potential, it has taken addiction in gaming to astronomical new levels. The genius of OlliOlli is that it almost dresses itself up as a quick pick up and play game. That’s not to say it doesn’t look great – the neon colours are as bright as Tokyo and every time you play it you’ll see something new, whether it be Canary Wharf or a nod to Fork Parker. But it still gives off the appearance of something that you’ll quickly play for 10 minutes before you go out. Which is fine, because ten minutes is all OlliOlli needs. It’s all it needs to suck you in.

Believe me, your skater is in for a torrid time because you are going to be rinsing him into the ground for hours, slamming his face into the pavement more times than you died in Hotline Miami. He’s the voodoo doll and you’re the one sticking pins into him. In some ways, the 2 games mirror each other. It’s the old “Die, Restart, Die, Restart…” experience you had in Hotline Miami. OlliOlli is very aware you will fail many times. That’s why the restart button is already waiting for you on the touchscreen. 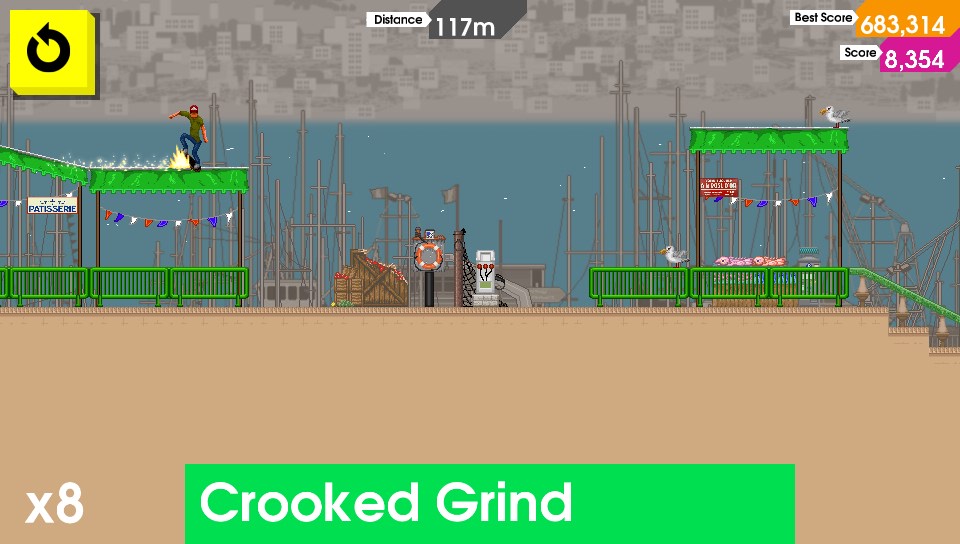 The concept of OlliOlli is a simple one that is executed brilliantly. It’s a side scrolling 2D skateboarding game and your aim is to rack up as many points as you can by hitting perfect landings and grinds. The later you leave your landing, the more points you will get. Leave it too late, and you’ll be hitting the restart button shortly after. You press to push, then flick your skater in the air by flicking the left stick. There are a whole host of different tricks all dependent on what direction you flick the stick, or whether you include the trigger buttons, and all can be referenced in the awesomely titled Tricktionary. Finally, you perfect your landing with how late you press just before hitting the ground.

There are loads of modes to play through here.

In Career, you have Amateur Mode, Pro Mode and after you’ve had corrective surgery on your thumbs, Rad Mode.

There are 5 different locations with 5 levels in each. You also have 5 objectives to achieve in each level, which are essential if you want to break out of Amateur.

The last section, Neon City, is one of the hardest things I’ve ever done on a Vita. Don’t get me wrong, I had an absolute blast getting there, but it’s not an exaggeration to say that I must have restarted one level between 75-100 times. That was on Amateur.

As fun as it is, at times OlliOlli will leave you sobbing uncontrollably into your overpriced, under sized memory card, crying out for something easier – like Vanquish on God Hard mode. It’s biggest annoyance is its biggest strength however, because you feel like you have an obligation to beat it. And as you close in on the finish line, it will take everything in you to not manically shout “I’M ALIVE!! I’M ALIVE!!“. The upshot is one of the best feelings you can get playing a Vita game.

Spots Mode is next. This is essentially a way of setting the best possible score you can on particular levels. These in turn are connected to their own online leaderboards.

The kicker is that you have to keep a combo going for as long as possible otherwise your spot will end. The obstacles to bounce off are limited and it’s a tense but hugely enjoyable part of the game.

Upping the tension even further is Daily Grind, a challenge that changes every 24 hours.

You can practice the randomised level as many times as you like, but you only get one shot at it for real. It’s again another really fun thing to check in on every day and a couple of times I came close to beating other times, but fell slightly short of the mark.

Although not crucial for completion or trophy progression, it’s a really cool feature that people will love coming back to, again and again. Then there are hidden skateboards.

Sometimes, when it looks like a certain level is over in Career Mode, if you get your timing right you’ll be able to keep going, racking up more points as you go and hopefully you’ll find one of the hidden skateboards along the way, which triggers a Bill and Ted esque guitar riff – Excellent!

The final rad thing about OlliOlli is the price. It’s £7.99, with a 20% discount for PS Plus members taking it down to £6.39. For a game with this much heart and soul put into it, it’s a really generous price for how many hours you will spend loving OlliOlli.

CONCLUSION
In the early stages of seeing OlliOlli, we knew we were watching something special. We felt that while others might be looking the other way, we knew it was only a matter of time before this game would finally get the recognition it deserved.

Make no mistake, OlliOlli has set a very high benchmark for what all handheld developers need to aim for this year. That’s why I love OlliOlli, because sometimes in life, it’s nice to be reminded that every now and then, the good guys win. Roll 7 have been sitting on a volcano waiting to erupt. Now that OlliOlli is here, your Vita will never be the same again.