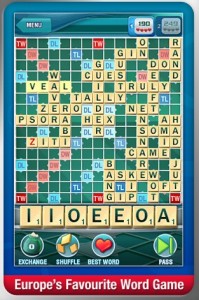 It’s finally happened folks! The official word game has landed on Android. Is this going to drag everyone away from Words with Friends?

Want to see if Apple fan boys and girls are better with language than the Android wordsmiths? How about challenging your Facebook friends as well?

Thanks to Hasbro and EA finally launching the official Scrabble app for Android we’ll soon be able to find out as this bona fide release which will allow cross-platform games between G-phones, iThings as well as Zuckerbergs network!

Looking for those lacking a lexicon or vulnerable with their vocabulary then just email them or track them down using their username.

At present I’m in the middle of 5 games on Words for Friends but on the official Scrabble game you can be partaking of up to 50 games at a time over Wi-Fi and 3G.

Of course this would not be a social game if you couldn’t play against an opponent chosen indiscriminately online – and so you can 🙂 You can even play a two player game on the same handset thanks to the Pass & Play mode.

The Android app is free to download from the Market.

The iPhone version is £1.19 and features a single player against CPU option. If you’re wanting to purchase the iPad HD version – that will hit you up for £3.99. But you can use your iPhone as your word tile holder 😉